The Foot Of The Cross: The Artist’s Perspective

Sorry that I have been slow to respond. I began this e-mail weeks ago but then the whole Covid-19 crisis began to explode and Iike everyone we have been engrossed in trying to adapt to a whole new reality. Much of my time has been absorbed in re organising the office so that my staff and I could work from home, and we have had to learn how to work using WhatsApp, Zoom & Microsoft Teams.

To answer your question about the paining which I had titled, “The Foot of the Cross”…. literally a painting of the last foot of the cross as it enters the earth… or the view someone would have while standing head bowed at the foot of the cross… both being valid interpretations.

The crucifixion is a fascinating and very challenging subject to paint. It has been the subject matter for very many of the world’s best artists over the centuries. I spent much time, some thirty years ago painting my first large crucifixion painting for Saint Michael’s Church in Dun Laoghaire, titled “Into your hands Lord”. 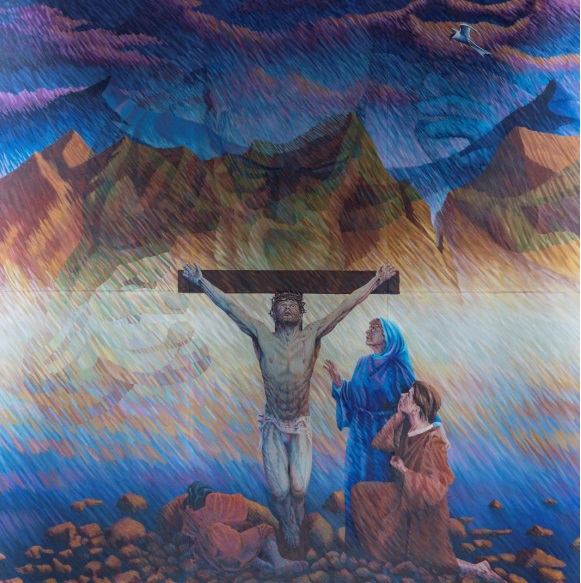 At the time I was very taken with a book I had read by the French Doctor Pierre Barbet who had studied what he believed to be the likely medical nature of Christ’s death on the cross, caused principally by asphyxiation. The strain for any person hanging on a cross tied to it, or more excruciatingly nailed to it, builds up huge cramps in the arms and chest so that eventually the victim can no longer breath no matter how much they try agonisingly to take some of the weight off their arms, by pushing down onto their bound or nailed legs. The visual reality of a body literally being hung from a cross began to fascinate me. When we were small children in school one of the punishments that the teacher sometimes gave us was, for us to stand up at the front of the class and hold our arms out straight to either side for 5 minutes. It’s not easy, it gets very sore! That’s just 5 minutes with the weight of your arm… less than a stone trying to support its own weight, not the weight of the rest of your body. It made me think. Dr Barbet in his book makes the point that if you accept his thesis that a person is killed by the weight of the body hanging on the arms causing asphyxia, then very few historical depictions of the cross actually capture that reality from an anatomical point of view; even though they are in themselves some of the greatest masterpieces and reflections on the suffering of our Lord that we have. This is because, from the point of view of anatomy, they are images generated most likely by the artist studying a man lying horizontally on the ground with his arm stretched out on a cross shape. None of the muscles are experiencing the level of stretch and painful contortion that a real body being hung would experience. I tried, in my crucifixion painting, completed in 1991, for St. Michael’s Church in Dun Laoghaire to depict something of that anatomical reality, but did not really succeed. But that painting did help me to secure a scholarship to study art the following year in the Florence Academy of Fine Art. While there I made a black and white study of the dead Christ that I thought, in regarding the anatomy at least, succeeded a little more.

I used this study of the crucifixion within the Last Supper painting I completed some 4 years later, also for St. Michaels Church. This time within the wine our Lord was pouring out at the table of that ultimate supper. 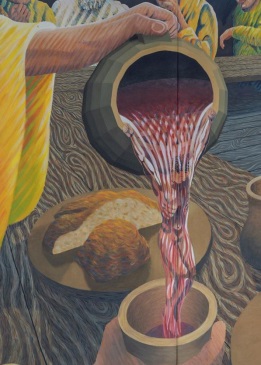 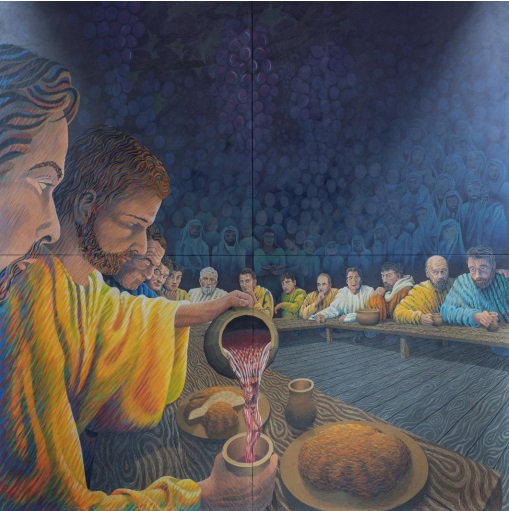 Again I felt I was only scratching the surface of the subject matter and hoped, sometime, to explore it further. About 10 years later I began to work in the Foot of The Cross.

Inspiration for the Foot of the Cross

The Foot of the Cross painting was inspired in part by Dali’s most amazing and famous Crucifixion, which for the first time in artistic history takes the viewer above the cross, a view perhaps, I used to think as an awe struck schoolboy, that God the Father Himself might have had: 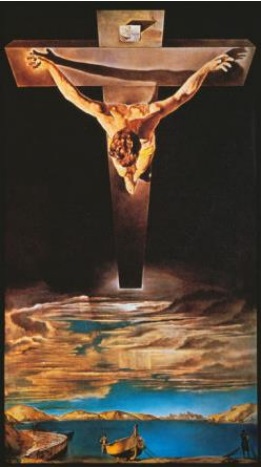 I was also inspired by my own love of water, both as a reality to paint and a metaphor for life, “the water of life”. I love the fact that water can have so many planes of reality; firstly the surface of the water playing and rippling, secondly the reflections that float in it, sometimes still, sometimes moving, sometimes semi-transparent, thirdly the world below the water, the river bed, the sandy seashore, or the fish that swim in it. 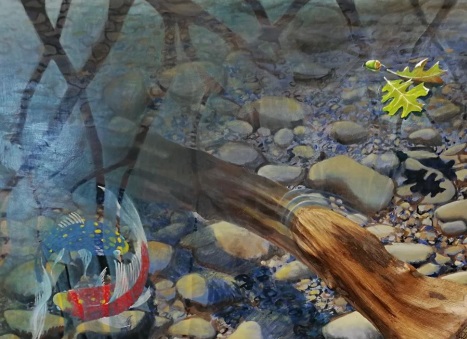 I have often thought that our own lives also have many planes of reality, the principal ones being our physical life & our spiritual life, & wondered how they should reflect or interact with each other; like light dancing on water perhaps.

Given the unusual angle that I wanted to depict I found it difficult to draw it just from my imagination and was not satisfied with my first pencil drawing studies and preliminary paintings done I think in approx. 2005 / 2006. 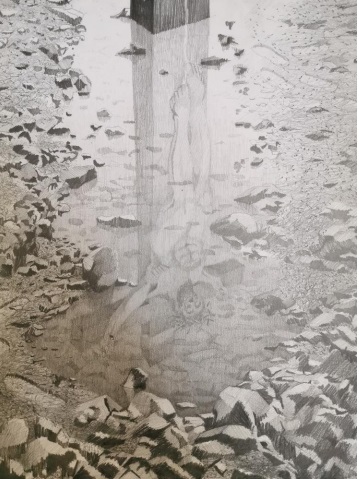 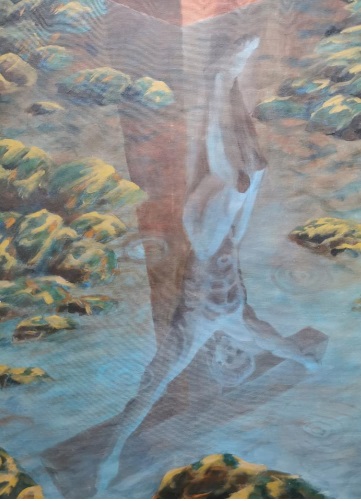 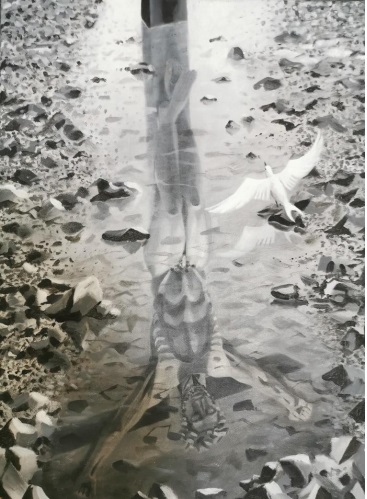 I therefore decided I needed to make my own small sculptural study using timber, modelling clay (now all dried & cracked as you can see from the enclosed photo), a mirror and some stones. In this way I could more accurately visualise the perspective that I was trying to capture. 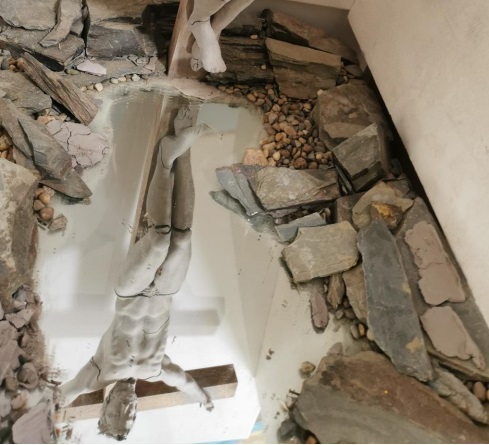 This became the basis for the painting that now hangs in Balally Parish Church. An earlier version, the same size but less complete hangs, or used to hang, in the small church of St. Luke’s in Mulhuddart.

It is painted on linen canvas if memory serves… being better quality and more dimensionally stable than the much more commonly used cotton canvas. By dimensionally stable I mean that when stretched over a backing frame which this is, it is less likely to sag over time.

The linen is prepared in the traditional way with a warm rabbit glue preparation applied first over all, so as to help bind the weave of the fabric and then, I think, 2 layers of gesso primer to give a good painting surface.

Thereafter having sketched in the main outlines of the composition in pencil the first layers of underpaint were applied in washes of acrylic paint. By washes I mean thin watery layers of semi-transparent paint using limited colours, so that one colour painted over another colour underneath would pick up some of that colour, and so form a third.

Once the main colour ranges and tonalities were established I moved to oil paints being stronger, more vivid and more pliable to work with, working until I was satisfied that I had taken it as far as my abilities could take me.

In reality I still regard it as something of a sketch notwithstanding the some 200 hours I spent on it, including the preparation and preliminary studies.

I have learnt much about painting in the 10 odd years since I completed it, and someday I hope to have the time to return to this particular composition and paint a better version.

Given that today is Good Friday, I have finally gotten around to completing this explanation. A very inadequate one, in that how can we really explain the crucifixion: A divine being, infinite in all dimensions, beyond comprehension decides to create a universe, our universe. That being over eons of time populates it with countless millions of galaxies, each made up of countless millions of stars. Then around one, not particularly notable star, spinning on the edge of a very ordinary galaxy, this Being calls into existence a little planet and encourages on its surface the gradual evolution of life; leading eventually to a puny but sentient animal that we call human. And then, an even more inexplicable act; this Being so devoted to its creation, to its art perhaps I like to think, feels the need to truly embrace it, ( “save it”, we Catholics maintain ), by distilling all that vast infiniteness into one individual human being, called Jesus. A mystery on top of a mystery. And we nail that Being to a cross!… and He lets us!!! His blood flows first from His living tissue, then mingled with the last remaining liquid in His dying body, water, both dripping to the earth. That earth, now wet and saturated, with the rain from the storm and lightning that accompanied the aftermath of His death. Divine blood and water mingling with earthly rain and soil, seeping into it, sanctifying it, forever perhaps. No I don’t believe I will ever really understand it, the crucifixion; but I am and remain, in rare moments of reflection like today, completely in awe and humbled by it. Someday I might, if I am lucky enough, paint a painting that approaches it with true insight and ability, but not yet, I have far too much to learn. Wishing you every blessing and good wish for this extraordinary Covid-19 Easter of 2020. 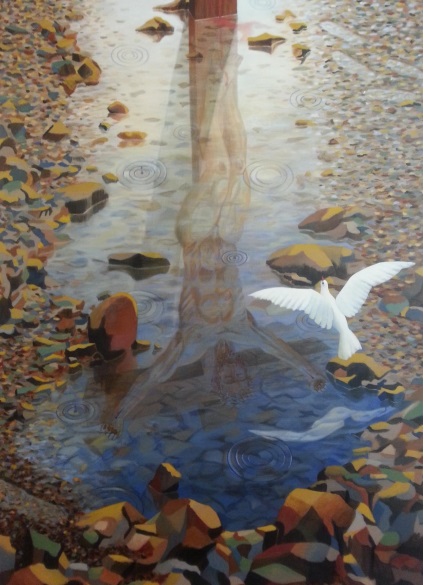